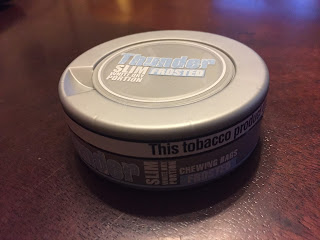 Back in October of 2015, I reviewed Thunder Frosted Slim White Dry. Now, V2 Tobacco has launched this product in the "chew bag" format for legal sale to the EU! If you're wondering about the differences between Swedish Snus and Nordic Chew (as it is now being called), I did this video which goes into the differences! When it comes to this product, the flavor description says: “Thunder Frosted Slim White Dry Chewing Bags have a strong flavor of spearmint and a long lasting taste. It has a mild tobacco flavor and the nicotine level is very high.” It is a 13.2 gram can with 24 portions, or 0.55 grams per portion. The nicotine content is 16mg/g (1.6%) or 8.8mg/portion. I know, that may sound low, as that level is common of regular strength snus. However, the nicotine feels much stronger! 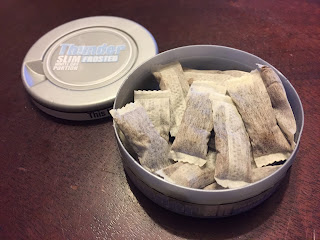 When you open the can, the aroma that comes through is a mild spearmint smell with a light sweetness. The portions are dry at first, but as they get more moist they get to be more comfortable. In the lip you’ll notice a cooling/tingling sensation which is common of most mint products. This being a white dry means the flavor develops slower, but also lasts longer - a benefit of the white dry format! The taste is milder than regular Thunder Frosted, but there is still a nice taste of spearmint. There is also a mild taste of tobacco in the background, and a light sweetness. The flavor lasts quite a while! I’ve had these portions in for up to 2 hours. The nicotine, though it is lower in nicotine per portion, still has a nice kick. It feels to be between a strong and an extra strong.

If you're a fan of mint snus and are somewhere where you can't get snus but can get chew bags, this one would be a great one to try!
Posted by Chad Jones at 12:29 PM