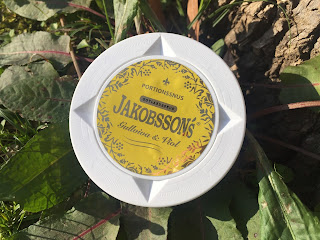 This is a seasonal product, launched in 2017 during the spring season.

I recently wrote an article about the Jakobsson's line getting a redesign and noticed that a product was missing - Gotland's Påsksnus, which usually launched ever year in the spring.  It appears as tough it has been replaced with this one. Henrik Jakobsson, CEO of Gotlandssnus, helped develop the product and had this to say about it: "After a long and careful development work, we have once again succeeded in producing a clear and qualitative product. We strongly believe the combination of tobacco and violets, and we are confident that consumers will embrace the new flavor." Anton Svegsjö, product developer at Gotlandssnus, said "It's fun and exciting to launch Jakobsson's cowslip and the orchid, and I feel really happy with the new flavor combination."

Violet isn’t a common flavor in the snus world. In 2009, Swedish Match released Catch Collection Still/Violet Licorice, which they relaunched in 2014 as a limited edition. Currently I only know of a couple of products sold that have a violet flavor: Gustavus Slim Cut Salvi, which has a violet/licorice flavor, and Anno 1852: Violet Licorice, also have a violet licorice flavor.  So, needless to say, I was excited to try this one.  But, if you're an American like me, you're probably wondering what Gullviva is. 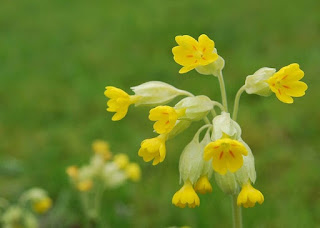 The product description says this snus has "a clear taste of violets with hints of cowslip and some sweetness."  This snus comes in a 20 gram can with 20 portions, for 1 gram portions. With a total nicotine of 10mg/g (1.0%) that breaks down to 10mg/portion.  Now, from what I can tell, Gullviva translates to cowslip in English. I found an article that goes into more detail, but to sum it up, here's what I found out about it. Cowslip comes from the Anglo-Saxon word “couslyppe”, which is said to be named because this grows where cows have been. It’s native to Europe and West Asia. Cowslip is mentioned in Shakespeare’s “The Tempest”, as well. It is said to be used in wine, tea, salads, medicine, vinegar and desserts. Another interesting note is that cowslip is sometimes called Keys of Heaven, because according to legend it grew from the ground where St. Peter dropped the keys to heaven.  What it tastes like, I have no idea.  I haven't found anyone who has had it, or anywhere online that describes the taste of it. 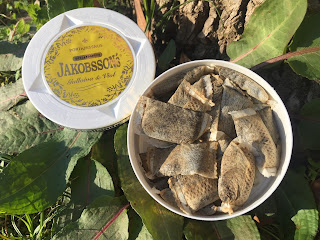 When you open the can, the aroma that comes through is predominantly violet with a tangy/earthy/grassy hint.  The portions are moist, but not too moist.  One thing I love about Jakobsson's portions is that they have the perfect amount of moisture to them for quick flavor release and long lasting taste.  The taste is really interesting. I was wondering which taste would be more present - the cowslip or the violet.  I was pleasantly surprised to see that the violet is the star of this snus!  It is very apparent in the flavor and comes through in a very natural way.  There is some mild sweetness to it, as well.  In the background, I notice a mild grassy flavor which may be due to the cowslip.  There also seems to be, like the aroma, a light amount of tanginess to the flavor.  The longer you have the snus in, the more the flavor will mellow and you'll also start to note mild hints of tobacco in the background.  It's a very interesting tasting snus!  The nicotine strength feels to be around the regular level.  Though it is listed at 10mg/g, I don't notice it to be too strong.  The flavor also lasts quite a while; I find I'm about to enjoy this snus for up to an hour!

I would definitely suggest trying this one out.  It's a great springtime flavor and is really unique.  Violet isn't a flavor that is common in the world of snus, so it's worth checking out!
Posted by Chad Jones at 7:40 AM