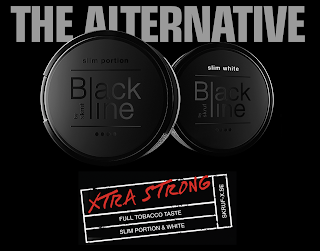 Apparently, the Skruf Black Line was created by “Team X”. They were said to be a group of rebellious Skruf employees who wanted to do things “their own way”. They apparently met in secret at hidden places to make a “momentous change”. Skruf Black Line was created because they wanted an “alternative of what they thought real craftsmanship is all about”.   The flavor description says "full tobacco taste", so I'm hoping this won't be yet another mint snus! 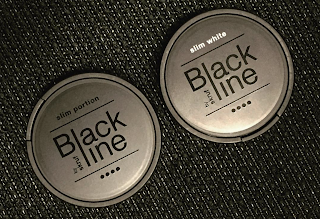 Today I discovered a photo of a new Skruf product line.  It appears as though Skruf is getting ready to launch a new product line called "Black Line".  In the photo it appears as though there will be slim original portion and slim white portion.  I don't know what the flavor profile is, but it's interesting to note that there are 4 dots filled in on the can's nicotine scale.  Skruf Xtra Stark also has 4 dots filled in on the nicotine scale, so from that we at least can tell that it's going to be an extra strong snus.  At this time, I really don't have any more information, but once I can gather more info I'll update this article!
Posted by Chad Jones at 3:04 PM