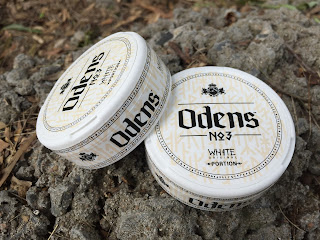 GN Tobacco launched the Oden's No3 line a few years ago to appeal to snusers who want a more traditional flavor. Back then, I reviewed Oden's No3 Portion, Oden's No3 Los, Oden's No3 Extreme Portion and Oden's No3 Extreme Los. Now, they're adding to the No3 line with Oden's No3 White Portion! GN Tobacco has also been releasing more white portions lately. In the past, they focused primarily on the white dry format, but now we're seeing more white portions from them. The only stores I've seen this at are OdensSnus.com and Snus24.com. The flavor description from Snus24 says, "Oden's No3 White Original Portion is a snus with traditional tobacco flavor. The tobacco which has been selected in Oden's Original has natural earthy undertones and a slight sweetness. Snus is lightly seasoned for good taste and with an added saltiness , the traditional Swedish tobacco snus. No oddities in other words." 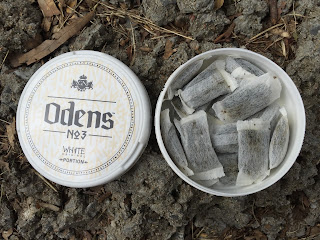 When you open the can, you'll notice the aroma is a citrusy smell with a very present smell of pepper. The citrus smell comes through with a light floral hint to it. The white portions are soft to the touch and feel great in the lip!  This snus is a regular strength snus, which comes in at 9mg/g for Oden's products.  The flavor is a little different from the aroma, however.  I do pick up citrus in the beginning, but the tobacco flavor is the star of this one.  While the citrus flavor is quite mild, the tobacco flavor is much more present.  It comes through in a big, bold way with a spicy pepper kick in the background.  There's also a slight smokiness to this one, as well.  Granted, it is a traditional flavored snus, so citrus is present, however I think the peppery tobacco taste is the star of the show in this one!  If you're into traditional flavors or tobacco flavors, I would suggest giving this one a try!
Posted by Chad Jones at 8:45 AM