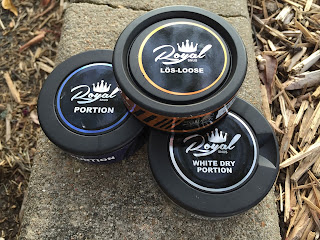 Royal Snus is a new product line from the same folks behind Chick Snus.  It has launched in three formats:  original portion, white dry portion and los.  It seems the company is going to cover both sides of the spectrum, with Chick Snus being marketed towards women, and Royal Snus being presumably made for men.  But then again, this product could really appeal to either gender, male or women.  If you want more information about this product line, they have a Facebook Page and an Instagram Page.  If you're in the US and want to try it out, Snus24 stocks it. 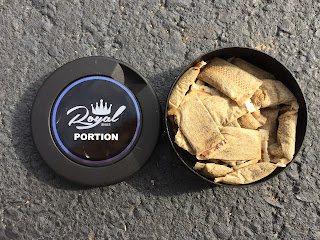 When I open a can of Royal Original Portion, a light and airy presence of bergamot comes through with a slight hint of mild tobacco and pepper.  The portions are quite comfortable in the lip and a good balance of moisture - not too moist, not too dry. The flavor reminds me a lot of Offroad Gold Original Portion.  A traditional Swedish Snus flavor profile - bergamot, a slight hint of orange, a mild tobacco flavor, a little pepper and a touch of salt.  It's a pretty solid tasting traditional Swedish Snus. 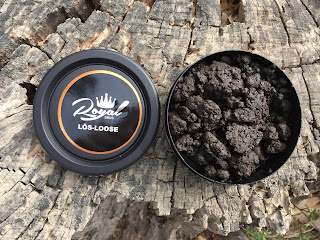 The grind of this one is really easy to work with, no portioning tool required.  This one is easy to handbake!  The aroma is a gentle balance of earthy tobacco and bergamot. The flavor reminds me a lot of Offroad Gold Los.  The mild, earthy tobacco taste is balanced in equal parts with a taste of bergamot, a slight hint of orange, a little pepper and a touch of salt.  It's a very traditional flavored Swedish Snus, but the tobacco taste is more present and it is paired perfectly and in equal balance with the citrus taste.  This one is a very tasty snus! 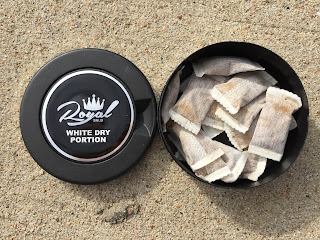 I've discussed white dry portions in the past, but in case you've missed those articles, I'll explain. A white dry portion is a "dry" version of a white portion, produced in the same way but without any moisture added. The nicotine absorbs into the blood slower than usual until the portion is completely moist, then it will work much like a regular original portion does. When snus is taxed by weight, it saves money to sell snus in the white dry format because the added moisture doesn't add to the cost. This product reminds me a lot of Offroad Gold White Dry Portion. The aroma is a very mild and light smell of bergamot with just a little tobacco in the background. The flavor takes a while to develop and begins as a mild citrus taste, but slowly builds as the pouch gets more moist. It's a milder flavor of the Original Portion.  The taste is predominantly bergamot, with a hint of orange, a mild tobacco in the background, a touch of pepper and a little salt.  When the pouch gets more moist, the flavor becomes more present, but not as present or as bold as the original portion version.

These are pretty decent products.  They have a traditional Swedish Snus flavor of bergamot and are pretty solid in the taste department.  If you enjoyed Offroad Gold, however, you'll probably enjoy these - as it seems the flavor is virtually identical.   I haven't seen them for sale online yet, but I'm sure they'll pop up online eventually!
Posted by Chad Jones at 10:54 AM