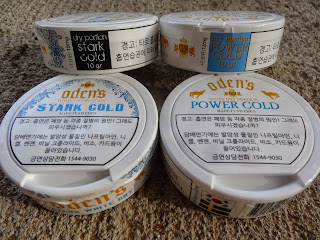 I've been catching up on our reviews lately, and the latest batch has been snuses that are exclusive to OdensSnus.com. We have a lot of readers in Europe who buy from them quite often, so I wanted to get reviews caught up that are only sold from OdensSnus.com.  These aren't for sale via the web stores that sell to the US, so these reviews are for our friends overseas. When it comes to GN Tobacco's "Cold" line, there are a  large variety of products under that name. In the past I've reviewed Oden's Cold Extreme Portion, Oden's Cold White Dry, Oden's Cold Portion, Oden's Cold Extra Stark Portion and Oden's Extreme Cold Los.  Today we're talking about two White Dry Cold products that are for sale on OdensSnus.com but come with Japanese/Chinese warnings on the can.  These may be for sale in Asian markets, hence the warnings in that format, but I'm not sure. 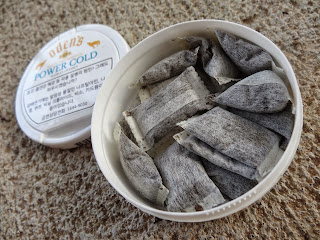 Oden's Power Cold White Dry has 12mg/g of nicotine. When you open the can, the aroma that comes through is a very light, very faint smell of spearmint. The portions being "White Dry" are slightly drier than other companies white portions, but aren't completely lacking moisture. The flavor is a very light presence of spearmint - it's not strong or overbearing at all, it's quite subdued compared to other mint flavored snuses I've had in the past. Compared to other Oden's Cold products, the strength of the flavor is about half that of the original portion formats I've had. I would suggest this one to people who like a mint snus from time to time, or enjoy the mint flavor, but want a snus where that flavor isn't too strong, but still want to experience the taste of mint. 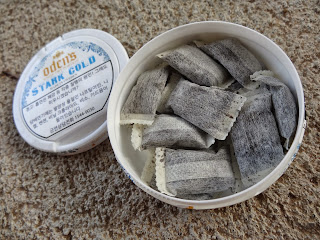 Oden's Stark Cold White Dry has 15mg/g of nicotine. When you open the can, the aroma that comes through is very much like Oden's Power Cold White Dry, a faint aroma of spearmint. The portions are also "White Dry", meaning they're a little drier than other manufacturers white portions, but they aren't completely lacking moisture. They are very soft and feel great in the lip.  This one has a little more tingle/burn in the lip than the Power Cold White Dry, but has a similar taste.  The spearmint flavor isn't as strong or bold as original portion Oden's Cold products, but it's still present.  The flavor is pretty close to Power Cold, but with a touch more nicotine content.  As I mentioned in the last review, if you're a fan of mint, or a casual mint snus user but want a snus where the mint flavor isn't too strong or overbearing, this would be one to pick up.
Posted by Chad Jones at 3:23 PM