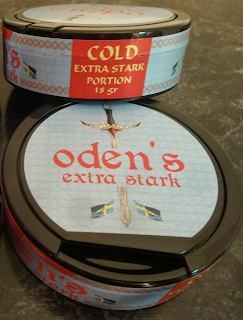 I've been catching up on our reviews lately, and the latest batch has been snuses that are exclusive to OdensSnus.com. We have a lot of readers in Europe who buy from them quite often, so I wanted to get reviews caught up that are only sold from OdensSnus.com.  This particular one isn't for sale via the web stores that sell to the US, so these reviews are for our friends overseas. When it comes to GN Tobacco's "Cold" line, there are a  large variety of products under that name. In the past I've reviewed Oden's Cold Extreme Portion, Oden's Cold White Dry, Oden's Cold Portion, Oden's Power Cold White Dry and Oden's Cold Stark White Dry. 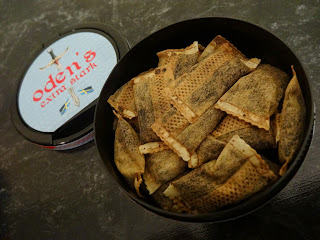 Oden's Cold Extra Stark comes in at 18mg/g of nicotine. The portions are original portions and moist but not too moist. The aroma is a natural smell of spearmint, but not super sweet. The portion has great mouthfeel and has a nice little burn/tingle in the lip. The flavor is a fresh, clean, natural spearmint taste. It's not too sweet, and you can pick up a little hint of the tobacco in the background and a little pepper flavor.  If you like the Oden's Cold line and want something stronger than the regular Oden's Cold Snus but not quite as strong as Oden's Cold Extreme, this one has the same great flavor but with a moderate nicotine strength.  The flavor also lasts about 45 minutes on average.  It's a pretty tasty snus if you like spearmint!
Posted by Chad Jones at 3:36 PM