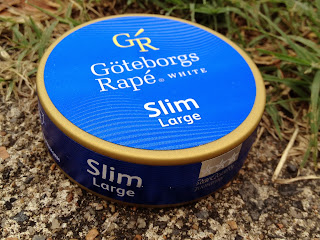 I recently picked up a can of GR Slim from The Northerner. With the success of General Tailored, Swedish Match is moving forward with another white portion snus into the "tailored" Natufibe format, Göteborgs Rapé. This one, instead of being called "tailored" is getting the name "Göteborgs Rapé Slim". To echo what I said about General Tailored, "The can is super cool looking, very classy with a denim/stitched style on top of it. The portions are amongst the most comfortable I've ever had, right up there with LD Black, which felt like silk on your gum. The can is smaller, but only slightly, than a regular sized snus can, it's about the size of a dip can." I really dig the cans and the super soft portions, it's definitely a step forward for this snus. GR has a pretty rich history, our friends at BuySnus have this article about the history of it, if you're curious about where GR came from, the name, and all that good stuff. 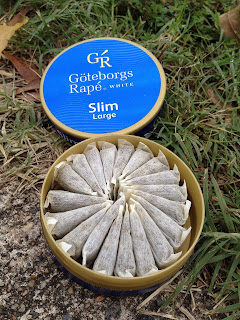 As far as the snus itself, I've reviewed GR and GR No2 in the past, but to quote from that review, because the flavor is identical - " Göteborgs Rapé is a very unique and complex snus. When you open the can - you'll notice the star formation - which Swedish Match now uses in all their white portion snus. The portions come out in a wedge shape, so a little fluffing is needed to get it ready for your lip. The aroma is juniper, very present, with a lemony undertone and a herbal/floral like quality to it. The taste is very interesting. Juniper is in the front, with a slightly citrusy taste and herbal/floral qualities. There is a neat little pepper bite in the background and a mellow salt balance to tie the flavors together. The fruit taste can be a bit bitter/sour - but that's part of the juniper berry. It's not a bad thing! I know a lot of Americans coming over from American "snus" to Swedish Snus read my blog and are going to be turned off because it's not sweet - but in time as you adjust to Swedish Snus you'll come to appreciate more flavorful snuses, which is definitely what this is. It's a very complex flavor that mellows out into a bittersweet taste. To be honest, this snus was on one of my first orders and I enjoyed the taste then, so even if you're into sweet snus you can still enjoy this one. It has a very unique taste and is a great alternative if you need a wild card to throw into your rotation."
Posted by Chad Jones at 10:35 AM